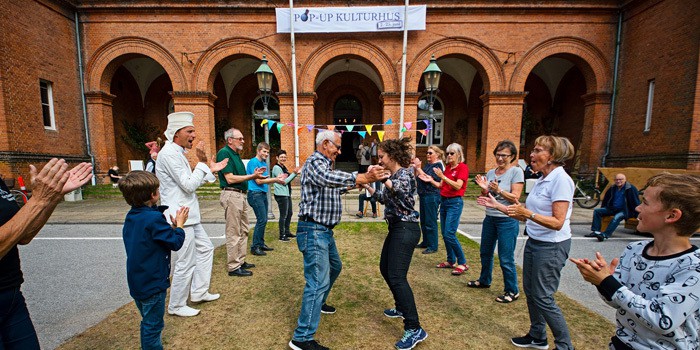 In the beautiful rooms of the Old City Hall at Stænderpladsen in Viborg, a culture house popped up in 2017 – a melting pot of cultural meetings across theatre, installation, storytelling, technology, light, sound…

Carte Blanche and a handful of international artists moved into the house and created four performances, specifically made for the place and the city. The culture house was also an open platform into which local and cultural innovators contributed their own projects and shared their ideas, visions and experiences.

Here the audience met all sorts of cultural projects: a labyrinth performance, a site-specific staging of the city, a wine-bar, an aesthetic playroom for families, a lounge-installation created by and for young people as well as a series of talks and presentations.

The culture house  popped up in June and culminated during the festive week of Viborg SNAPSTING.

POP-UP CULTURE HOUSE was the culmination of Carte Blanche’s project “The Art of Listening” which was the theatre’s contribution to European Capital of Culture Aarhus 2017.

CREATED BY
Carte Blanche, a team of international artists and local culture institutions and artists

WHERE
The old city hall at Stænderpladsen 2, Viborg

AGE GROUP
For everyone

PRICE
The price is based on the concept pay what you want. This means you can decide what you think the performance is worth and pay accordingly.